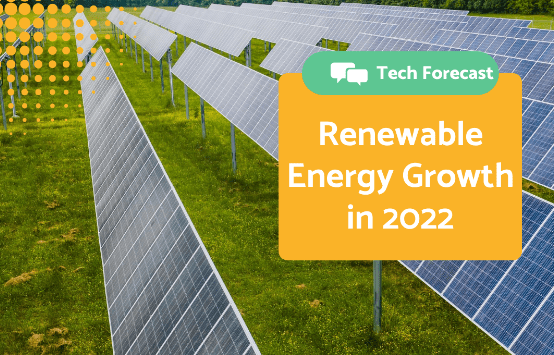 Renewable Energy is estimated to accelerate in 2022.

First and foremost, we wish you all a great year of 2021.

Renewable energy growth is poised to accelerate in 2022, as concern for climate change and support for environmental, sustainability, and governance (ESG) considerations grow and demand for cleaner energy sources from most market segments accelerates.

New technologies
Growing interest in next-generation clean energy technologies
Activity is heating up in next-generation technologies. Renewable energy industry stakeholders are considering investments in them, which can eventually help to confidently integrate variable renewables such as wind and solar into the electric grid. For an industry that has largely focused on solar and wind, private investment and pilot projects combined with federal research support could help expedite commercialization of emerging technologies such as green hydrogen, advanced batteries, and other forms of long-duration storage. These technologies can provide zero-carbon electricity and longer-term seasonal electricity storage, ease grid congestion, stem renewable curtailment, boost reliability, and facilitate integration of solar and wind into the grid while supporting goals for 100% clean energy.

A major driving force behind the rise of green hydrogen has been the decreasing costs of renewable energy—a critical input in the production process. In 2022, as renewable energy penetration on the grid increases, green hydrogen development is also expected to grow, owing to its potential to act as long-duration and seasonal storage of fuel available on demand to generate power. States and energy companies are also responding to this opportunity and ramping up renewable hydrogen production. Interest is also high in a host of evolving mechanical and battery storage technologies offering long-duration energy storage options and supporting the grid.

After an 85% cost decline over the past decade, solar photovoltaic (PV) systems are among the most cost-competitive energy resources in the market. As it flexes its competitive muscle, the solar industry will likely boost efforts to explore new configurations and business models. And 2022 could well see the industry growing solar-plus-storage buildouts, exploring floating solar PV modules, and expanding community solar projects to new markets. Pairing storage with solar offers cost synergies, operational efficiencies, and the opportunity to reduce storage capital costs with the solar investment tax credit.

A second trend is the expansion of community solar projects to new markets in the United States. Twenty-two states, plus Washington, DC, have enabling policies for community solar. With more than half of US households unable to purchase rooftop solar due to lack of sufficient sun, credit access, homeownership, or other factors, these programs allow residential customers to enjoy the benefits of shared solar power. And finally, although a nascent technology, floating solar photovoltaics (FSPV) are also gaining attention in the United States, and several developers are exploring these projects either separately or as hybrids with hydro, which could benefit from a shared substation and transmission.
New business
models

Transmission infrastructure is becoming a key priority, especially for offshore wind
Transmission development, which is key for connecting new, often remotely located renewable energy capacity to electricity consuming centers, is expected to be an important part of the renewable energy industry’s agenda in 2022. Policy and regulatory support, investments, and innovation will likely help unlock progress, which has often been stymied by siting and permitting delays. Transmission projects, especially interregional, have so far remained a major challenge for renewable growth as they face difficulty in gaining regulatory approval from every state they cross, as well as refusal from landowners, and opposition from environmental groups.

About 844 GW of proposed capacity—90% of which is renewables or energy storage—is stuck in transmission interconnection queues. This holds especially true for offshore wind, which is poised for significant growth and must be connected to coastal infrastructure. Both enhancing the capacity of existing lines and building new lines could be key in solving the transmission challenge. In fact, 76% of the power and utility respondents to a recent Deloitte survey are either planning or depending on new transmission projects to boost renewable energy access.
Infrastructure
development

Supply chain strategies continue to evolve
Supply chain ecosystem
The renewable energy industry is likely to continue to evolve supply chains, as profits have suffered recently amid logistics-related cost pressures and US-China trade tensions. In 2021, the solar industry remained under pressure and prices increased year over year for the first time in seven years due to supply shortages of components, raw materials, and labor as well as rising shipping costs. In 2022, US renewable energy developers will likely continue to seek alternative suppliers, including domestic manufacturers, where available; reassess supply needs; and develop substitutes to help alleviate these pressures.

In the coming year, many solar installers and developers will likely also ramp up their compliance monitoring activity, as they try to adhere to the Solar Energy Industries Association’s Solar Supply Chain Traceability Protocol—a set of guidelines intended to trace the origin of solar materials, especially to prove their procurement is free of unethical labor practices. In the wind sector, the United States has increased domestic turbine component production with more than 500 manufacturing facilities in 40 states. But the industry still depends on offshore manufacturers for many components. To further boost domestic production, advanced energy manufacturing tax credits are included in legislation that Congress is considering.

It is critical to sustainable growth in the renewable energy industry